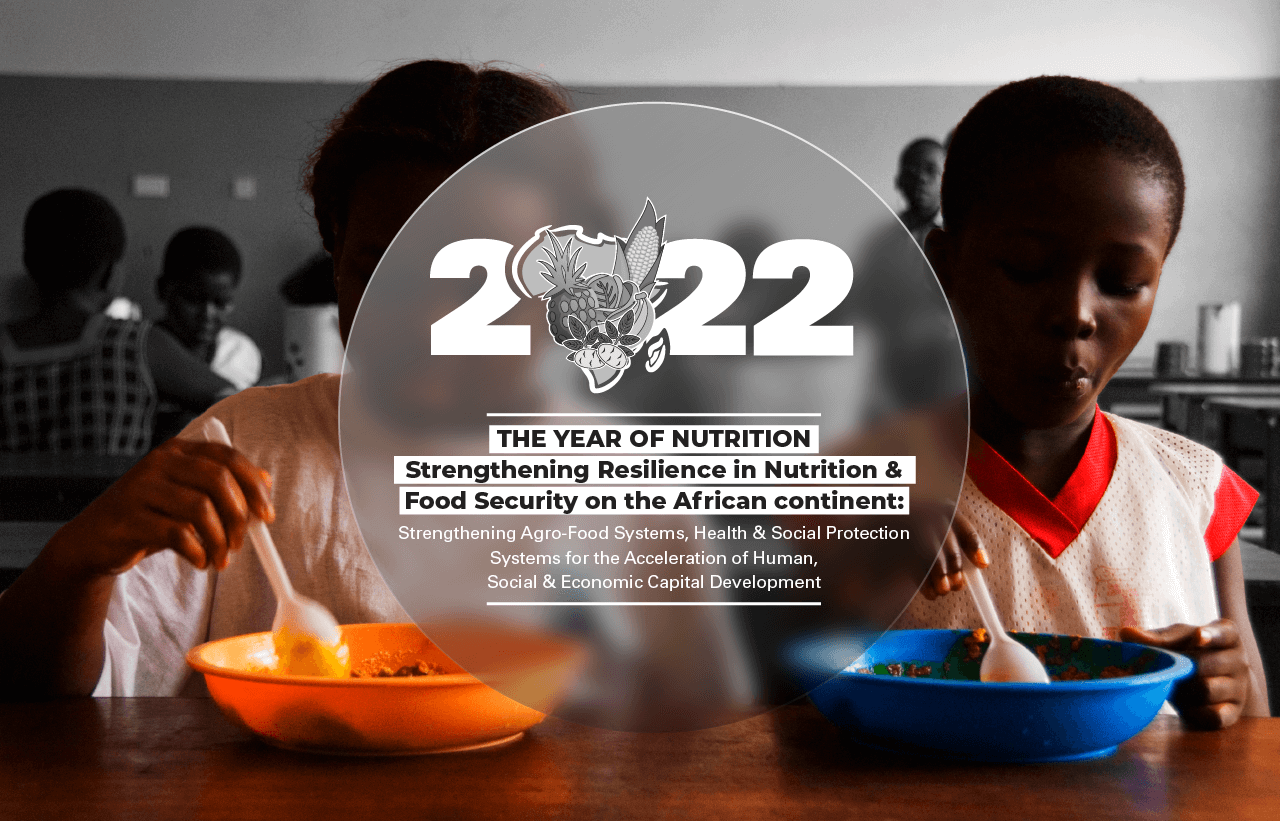 Strengthening Resilience in Nutrition and Food Security on the African Continent: Strengthening Agro-Food Systems, Health and Social Protection Systems for the Acceleration of Human, Social and Economic Capital Development

As part of the long-term vision set out in Agenda 2063, the Assembly of Heads of State and Government of the African Union has adopted common African aspirations, drawing on the potential of its populations, in particular, a human capital well-nourished citizens and in good health with a particular emphasis on women, adolescents and children. Human capital is key for development as it leads to improved lives for individuals, higher earnings and improved incomes for countries.

Africa was estimated to have a population of 1.25 billion in 2018 and is the fastest urbanizing continent, with a growth rate of more than 2.6 percent. The large youth population presents a potential demographic dividend that, if adequately leveraged with the right investments, could contribute to accelerating sustainable and equitable development. Over the years, the under-5 mortality has reduced by more than 50 percent between 1994 to 2019; fertility rates have declined from 6 to 4 children per women. However, compared to the rest of the world, the malnutrition remains high in the continent and under nutrition is particularly an underlying cause of almost half of child deaths.

According to the findings of the Continental Accountability Scorecard launched by the African Union and the Africa Leaders for Nutrition (ALN) in 2019, data shows that in the African continent;

At the same time, overweight, obesity and non-communicable diseases related to the quality of diets are increasing rapidly, worsening morbidity and mortality rates. Malnutrition, by its double manifestation, does not spare any African country at one point in the life cycle. Malnutrition is not only one of the worst killers of children under five years of age but prevents children and adolescents from reaching their full potential, and traps entire populations in vulnerability. Through its negative effects on the development of human capital and its productivity, malnutrition contributes to the delay in African countries’ economic and social development, with unacceptable human consequences on African individuals, communities and nations.

New evidence has shown that the persistence of the burden of malnutrition has very significant consequences for physical, mental, cognitive and physiological development of African children; hence it has become a critical human rights issue that goes far beyond the already existing volatile public health impact. At the same time, evidence shows that malnutrition leads to decreased social and economic development of nations and becomes a very important political and economic development issue.

According to the findings of the Cost of Hunger in Africa Study, it is estimated that African countries are losing the equivalent of between 1.9 and 16.5 percent of their Gross Domestic Product (GDP) due to child under-nutrition. It is also estimated that malnourished children are at risk of losing more than 10 percent of their lifetime earning potential.

In addition to existing malnutrition challenges the global health crisis of Covid-19 has greatly exposed the economic vulnerability of African countries and the weaknesses of their health and food systems. The price to pay for keeping the virus at bay has been, in many African countries, at the expense of gains made in reducing malnutrition. It is vital that these gains are protected by increased and well-targeted official development assistance, but above all by an increase in allocations of national resources, focused on the nutritional well-being of populations, including the most vulnerable ones.

While the past decade has made it possible to acknowledge better the importance of investing in nutrition at global and continental levels, substantial efforts are still needed to stem the scourge of malnutrition through various strategies: