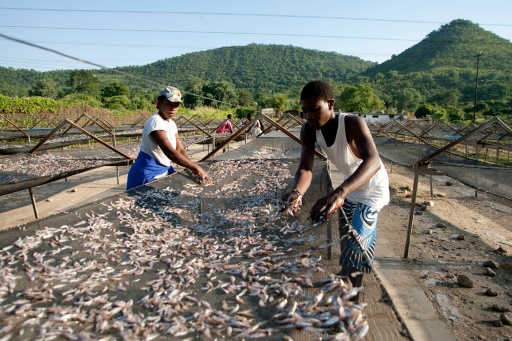 Zimbabwe and Zambia held bilateral talks to reduce over-fishing and improve fisheries management on Lake Kariba as part of efforts to promote the conservation and sustainable use of marine resources on the world’s largest man-made lake and reservoir by volume.

Environment, Climate, Tourism and Hospitality Industry Minister Nqobizitha Mangaliso Ndhlovu and his Zambian counterpart – Minister of Green Economy and Environment Collins Nzovu held the discussions on the sidelines of the just-ended fifth session of the United Nations Environment Assembly in Nairobi, Kenya

The main issues discussed included the problem of over-fishing which was now threatening the two countries negatively.

Small-scale fish operators from both countries were breaching agreements that were reached by the two countries in 2014.

A Technical Committee on Development and Management of the Fisheries and Aquaculture of Lake Kariba recommended that Zimbabwe and Zambia should reduce fishing rigs operating in Lake Kariba to ensure the survival of the industry.

“The countries had agreed on the number of rigs each country could deploy on the Zambezi River. In Zambia (225) and Zimbabwe (275). However, currently, Zimbabwe has 429 rigs, while Zambia has 1 500. This among other fish methods is creating overfishing, fish mortality, small-sized bred fish,” Minister Ndhlovu said.

Scientific studies recommended that the lake can only sustain a maximum of 500 rigs.

Apart from over-fishing, pollution of the Zambezi river was also threatening fish stocks as well.

The Kapenta Producers Association of Zimbabwe (KPA) says there has been a steep decline in the stocks of a key fish – Kapenta – in Lake Kariba, which lies on the border between Zimbabwe and Zambia.

This, the association says, has led to a rise in the price of the delicious fish species.

At its peak in the 1990s, the association says, it realised between five to 15 trays per vessel, but they are now netting as little as two trays per vessel or even less.

A growing number of fishing vessels in Kariba dam from both Zimbabwe and the Zambian sides has also led to a decrease in catches.

In 2020, Zimbabwe Parks and Wildlife Management Authority (ZIMPARKS) stopped the issuance of fishing permits to curb the depletion of the fish.

The maximum number of fishing rigs allowed in Lake Kariba is 500.

Millions of people in the Zambezi basin region eat kapenta in their daily diet and thousands of fishermen earn their living by catching it.

But now, over-fishing – together with an increase in freshwater crayfish, which eat kapenta eggs and hatchlings – is now threatening livelihoods, jobs and food security.

In addition to the huge numbers of unsustainable fishing vessels, fish poachers who reportedly flood Lake Kariba at night have also compounded the problems.

Small-scale fisheries play a significant role in enhancing livelihoods, creating employment and contributing to food security for both Zimbabwe and Zambia.

The fishing communities in both countries are highly dependent on natural resources, which are climate-sensitive.

They urge governments to develop small-scale fisheries policies that could positively enhance livelihoods and food security.

More than a third of the fish stocks around the world are being overfished and the problem is particularly acute in developing countries, the United Nations Food and Agriculture Organization (FAO) said in a report released in 2020.

Small-scale fisheries account for more than 90 percent of the world’s capture fishers and provide livelihoods and food security for millions of individuals around the globe.

Globally, more than 1 billion people derive their protein and micronutrients from fish, whilst in sub-Saharan Africa, it is the main or only source of protein to more than 20 percent of the population.