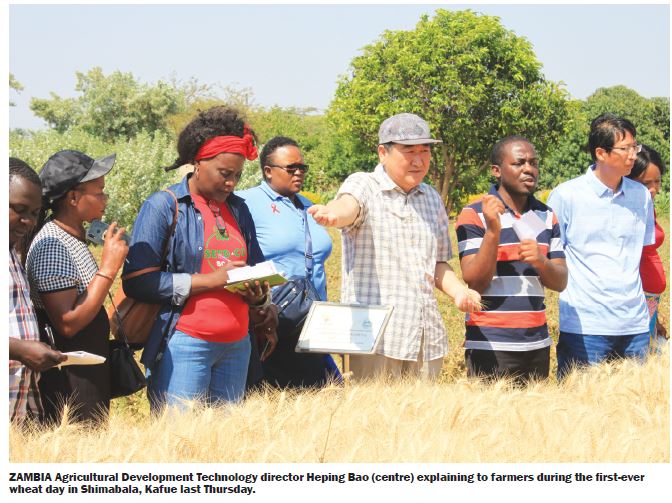 THE cultivation of wheat has for a long time been a preserve of commercial farmers in Zambia.
This, however, is set to change in Kafue district following the successful pilot project by two female farmers in Shimabala area who are practically debunking the myth.
Joyce Lungu and Jane Musumina of Lukolongo Agricultural Camp became the first-ever peasant farmers in Kafue district to grow wheat.
Ms Lungu, who cultivated the overhead irrigated wheat on one acre did not encounter any problems after having followed all the guidelines.
Ms Musumina equally attests that she never encountered any major challenge during the cultivation of wheat.
From her experience, wheat is easier to cultivate than maize.
Though they did not experience attacks from diseases – they had unexpected troublemakers as the crop blossomed – birds.
Birds are attracted to wheat at milk stage because it is soft and sweet.
The duo shared their experiences during the first-ever wheat field day field organised by the Chipapa Agricultural Block under which Lukolongolo falls.
The theme was “Crop Diversification – Wheat Production.”
The two farmers cultivated a wheat variety called JZ5, produced by the Zambia Agricultural Technology Demonstration Centre (ZATD) in partnership Jilin Agricultural University in China and the University of Zambia (UNZA).
Aggrey Chipuluka, the area block extension officer said what is considered to be a crop for commercial farmers is being tried out by small-scale farmers.
ZATD director Bao Heping said trials for JZ25 are being carried out in three other sites in Zambia to determine its suitability.
Apart from Lukongolo in Shimabala, other sites where wheat is being tested are Chongwe (Kanakatampa), Chilanga and Kafue.
Professor Bao was happy that through the demonstration plots in Shimabala, small-scale farmers shared their experiences and knowledge.
“We are aware maize is number one (staple food) in Zambia but the income is low,” Prof Bao said, referring to the market price of maize.
He said wheat fetches a high price, hence the decision to introduce the crop to peasant farmers.
“Maize fetches [at] K1, 800 per tonne (almost US$180) but wheat fetches US$400 per tonne (almost four times the price of maize) and the yield is higher per hectare compared to maize,” Prof. Bao said.
While maize in Zambia is grown mostly in the rain season, wheat is planted during the dry periods from April 20 to May 10 on well-tilled land.
The small scale farmers also benefitted from the expertise of two Zambia National Service (ZNS) officers with years of growing wheat in Chanyanya on the outskirts of Kafue.
Mabinda Hambwalula said although wheat is grown mostly by commercial farmers, even peasant farmers have an opportunity to grow the crop.
Captain Hambwalula said wheat is a high value crop, hence small-scale farmers can make more money from wheat than maize.
“I encourage you to start growing wheat, the cost of growing wheat is lower,” he said.
Dave Kapaya, a ZNS warrant officer said “Let us change the mindset, let us make money,” he said.
Allaying the farmers’ fears of being stuck with the produce as is the case with maize, Mr Kapaya said the crop has a high demand in the country.
“People will be following you. [Wheat] is bought even before planting,” Mr Kapaya said.
He advised farmers to work closely with agricultural extension officers, seed suppliers and other service providers before and during cultivation.
Kafue senior agricultural officer Monica Mulenga advised farmers to take advantage of the wheat.
Ms Mulenga said Kafue has 15,000 farmers but only two have demonstrated that it can be done.
Lukongolo camp agricultural committee chairperson Christine Singoyi thanked China Aid which funds ZATD for introducing wheat in the area.
Ms Singoyi said wheat cultivation is part of agricultural diversification especially that agriculture has become business and cultivation has to be done throughout the year.
Apart from wheat, ZATD has also been training peasant farmers drawn from across the country in mushroom and soya beans cultivation as well as village chicken rearing.
To date, over 1,000 peasant farmers have so far been trained in growing high value crops in order to earn decent income as part of poverty alleviation.