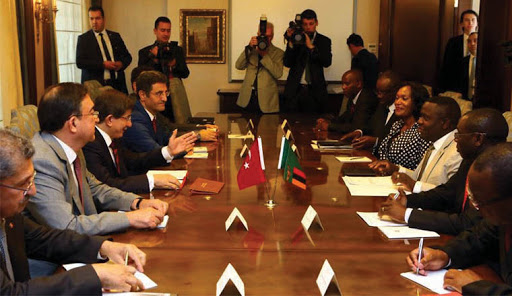 TURKZAM, a Turkish manufacturer of milling machines, has designed a prototype to simultaneously produce starter, grower as well as finisher feed.

TURKZAM Board Chairperson, Ms. Nihal Alakoc said that the fish feed machine is designed for small-scale, medium and commercial farmers.

This came to light on Thursday, November 26, 2020 when First Secretary Economic and Trade,

Ms Alakoc who visited Zambia from October 21, 2020 to November 7, 2020 on a Business Mission, described the country as an investment and tourism destination of choice.

“We decided to name our company TURKZAM because of the warm relations and brotherhood that exist between our two countries.

We believe that our friendship will be further strengthened through this gesture,” she said Ms Alakoc added that during her visit to Zambia, she held fruitful discussions with the Zambia Chamber of Commerce and Industry and also met four traditional leaders, namely  Senior Chief Puta of Chiengi district in Luapula Province, Chief Ishima of the Lunda people of Zambezi district in North Western, Chief Ka-puta of Kaputa District in Northern and Chief Chipepo of the Tonga people of Gwembe Valley in Southern.Mr Kaoma, who represented Zambia’s Ambassador to Turkey, His Excellency, Dr Joseph Chilen-gi, said that the Zambian Government under the leadership of His Excellency, Dr Edgar Chagwa Lungu, President of the Republic of Zambia, had prioritized development of the fisheries industry and aquaculture sub-sector to ensure national food security.

“It is worth noting that His Excellency, President Lungu has taken the lead in demonstrating the importance of aquaculture to all Zambians by establishing fishponds and his Government Weekly Dispatch

“We decided to name our company TURKZAM because of the warm relations and brotherhood that exist between our two countries,”-