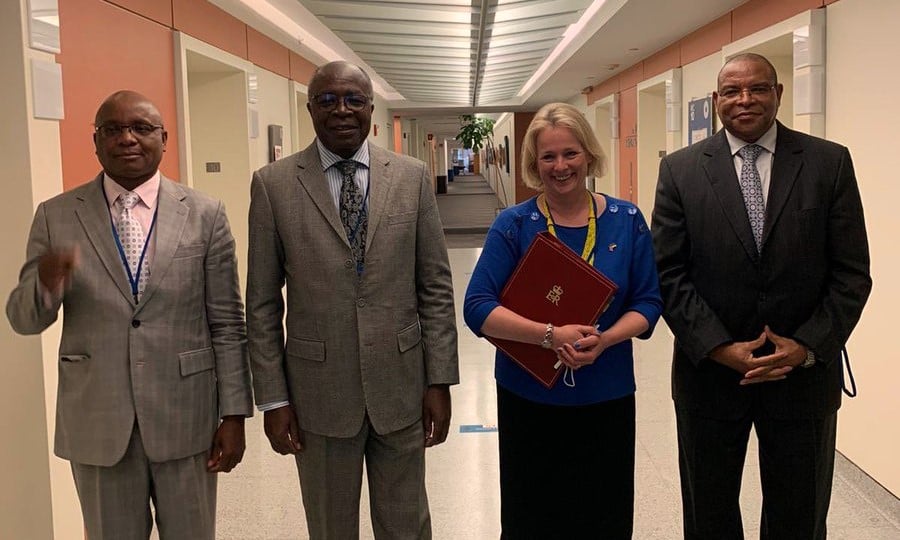 Spread the love
Post Views: 270
2022 IMF & WORLD BANK SPRING MEETINGS UPDATE – BRITAIN
The Zambian delegation to the 2022 Spring Meetings of the IMF & World Bank Group in Washington DC, has held successful bilateral talks with the British Government.
In a meeting where Britain was represented by Honourable VICKY FORD, MP, Minister for Africa, Latin America and the Caribbean, the bilateral partners discussed need to further strengthen development cooperation.
Zambia’s delegation leader Dr. SITUMBEKO MUSOKOTWANE, MP, briefed Ms. FORD on the state of the Zambian economy, the country’s economic transformation programme and the debt restructuring process. He took the opportunity to appeal for support for the country’s debt restructuring process.
During the deliberation, Ms. FORD called on all of Zambia’s creditors to deliver on their commitments made to the common Framework.
“Met Zambian Minister of Finance (and National Planning) Dr. SITUMBEKO MUSOKOTWANE to discuss their progress made on economic reforms to drive growth. All creditors must now deliver on commitments made to the Common Framework,” Ms. FORD later posted on her official twitter account.
Dr. Musokotwane was accompanied to the meeting by Secretary to the Treasury FELIX NKULUKUSA and Bank of Zambia Governor Dr. DENNY KALYALYA.
And later during a live interview with an influential American think-tank, The Atlantic Council, Dr. MUSOKOTWANE announced that President HAKAINDE HICHILEMA will soon be launching the Business Advisory Council Consultative Process for the public sector, private sector, and other economic sector stakeholders.
The Minister and his delegation are in Washington DC, for the 2022 Spring Meetings of the IMF and World Bank Group. Supportive and side meetings and events, held on multilateral and bilateral platforms, are scheduled throughout the Spring Meetings. The 2022 meetings are from 18th to 24th April, 2022.
NOTES ON THE COMMON FRAMEWORK
The Common Framework for debt treatment beyond the Debt Service Sustainability Initiative, is an initiative endorsed by the G20, together with the Parish Club, to support, in a structured manner, Low Income Countries with unsustainable debt.
The Common Framework considers debt treatment, on a case-by-case basis, driven by requests from eligible debtor countries. In response to a request for debt treatment, a Creditor Committee is convened. Negotiations are supported by the IMF and the World Bank, including through their Debt Sustainability Analysis.
The idea is that the debt treatment under the Common Framework should be accompanied by reforms ensuring the future sustainability of public debt, and consistent with the parameters of an Upper Credit Tranche (UCT) IMF-supported program.
The Common Framework represents a change for official creditors, bringing together the Paris Club and G20 official bilateral creditors in a coordinated process. Such approach will allow to address solvency challenges with a long-term perspective, ensuring the participation of private sector creditors and of other official creditors through the comparability of treatment clause included in the multilateral agreement, which implies that they provide debt treatments on terms as least as favorable.