Just five years ago, Sudan’s farmers harvested a mere 472,000 tons of wheat from about a quarter-million hectares of land. Today, the Sahel country  is on the cusp of becoming a regional breadbasket.

One of the reasons for Sudan’s agricultural turnaround is the Technologies for African Agricultural Transformation (TAAT) program, which is funded by the African Development Bank. Within the next four years, TAAT aims to raise Africa’s food output by 100 million tons and lift 40 million people out of poverty by harnessing high-impact, proven technologies to raise agricultural productivity and mitigate food-security risks associated with climate change. 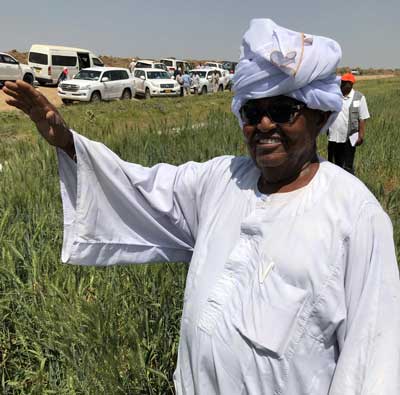 “Now, we consistently have good-quality wheat and in record quantities,” said Daf’Allah Mohamed Ahmed, a Sudanese farmer taking part in the TAAT program, which includes the provision of training on production techniques. “My wheat yield increased from 2.5 tons to 5 tons,” said Ahmed, with a broad smile.

The new agricultural technologies not only improve harvests but also enhance the quality of life for thousands of families in Sudan.

Sudan and other TAAT success stories have led the Bank to advance other initiatives to fuel the continent’s agricultural transformation. At the One Planet Summit on January 11, 2021 the Bank pledged to help mobilize up to $6.5 billion over five years to advance the Great Green Wall project, which aims to plant an 8,000 km-long swathe of trees, grassland and vegetation across the Sahel to rejuvenate degraded terrain, create green jobs and reduce political instability.

The resources will be made available through a range of programmes supporting the Great Green Wall by drawing on internal as well as external sources of funding, such as the Sustainable Energy Fund for Africa and the Green Climate Fund, among others.

The Bank has made the Sahel a top priority for investment and for mobilising new sources of finance to advance Africa’s climate adaptation opportunities. Climate change has led to extreme temperatures and fluctuating rainfall and drought in the region, home to 250 million people across several countries. Millions of livelihoods and hard-won development progress are threatened.

TAAT’s results in Sudan, one of the GGW countries, hold promise for the initiative’s

success. Through TAAT, Sudanese farmers gained access to heat-tolerant wheat varieties and other productivity-enhancing technologies, helping the country to boost yields and move closer to self-sufficiency in the production of wheat, a staple.

Since 2017, the program has rolled out improved, certified seeds that are better suited to Sudan’s hot and dry climate. As a result, the country recently recorded its largest wheat harvest. Wheat production in 2020 reached 1.1 million tons from 315,500 hectares of farmland. Development experts say the nation is on a path to becoming Africa’s next powerhouse wheat producer.

The Great Green Wall initiative, coordinated by the African Union, will promote the inclusive, green development in the Sahel and Sahara regions, a goal that has gained added urgency as a result of the coronavirus pandemic.

Bank President Akinwumi Adesina noted as much during the One Planet Summit, saying “as we rebuild from the coronavirus and its impacts on our world, we must re-calibrate growth. We must prioritize growth that protects the environment and biodiversity, and we must de-prioritize growth that compromises our common goals.”