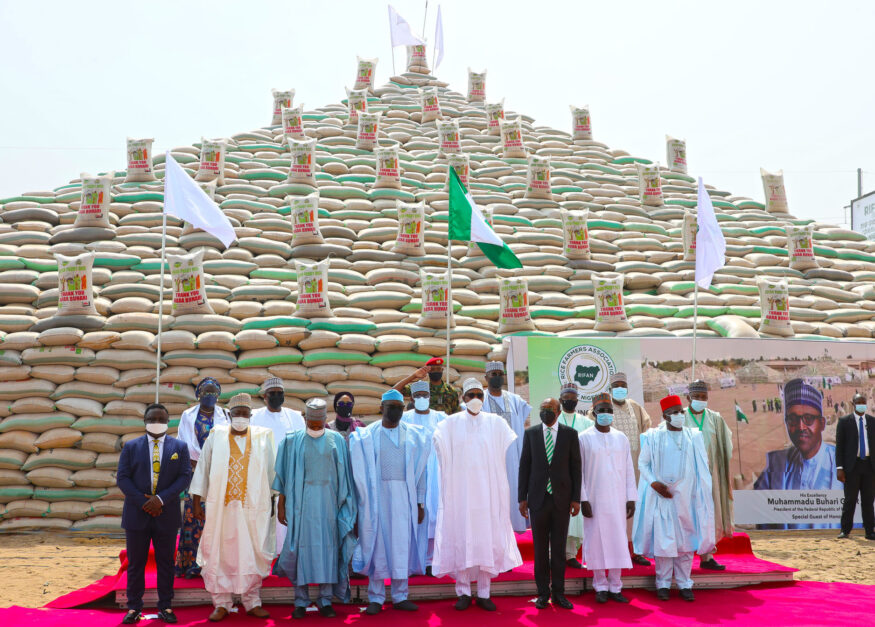 Nigerian President Muhammadu Buhari is unveiling a massive pyramid of rice harvested by farmers to pay back bank loans they borrowed to expand their production. Nigerian officials say the low-interest loans helped more than double the average yield of rice and maize, ending the country’s dependence on rice imports. The Central Bank of Nigeria plans to sell the rice at below market rates to reduce the high prices that consumers have been paying for the staples.

The massive pyramid of rice bags stacked one on top of the other was unveiled Tuesday at the chapter office of the Nigerian Chamber of Commerce in Abuja.

Nigerian President Muhammadu Buhari presided over the ceremony, with top government officials, including from the Central Bank and various state governors, in attendance.

President Buhari praised the farmers and urged more of them to participate in the loan program.

“It is my desired hope and expectation that other agricultural produce commodities will emulate the rice farmers association of Nigeria in supporting our administration drive for food self-sufficiency,” he said.

The Anchor Borrowers Program was launched in 2015 by Nigeria’s Central Bank. The plan provides rice farmers with loans and technical advice so they can expand production and increase yields while limiting the nation’s dependence on imports.

Authorities say more than five years later, the program has yielded the desired result, reducing rice imports significantly, and boosting local production from about 4.5 tons a year to nine.

Central Bank Governor, Godwin Emefiele, says the resilience of farmers has paid off.

“Permit me to commend all our holder farmers and the leadership of their various associations for their diligence, bravery, patriotism and [adaptability],” he said. “The past few years your Excellency has been quite challenging for these people as they have battled with insurgency, banditry, lockdowns and other related setbacks. Indeed, we lost some of our farmers to insurgency attacks nationwide, while some could not access their farms for several months.”

Nigeria banned rice imports in 2015 with the aim of producing the staple locally.

At Tuesday’s launch, authorities expressed confidence that adequate quantities of rice could be produced locally, saying the trend could affect the domestic price of rice.

Meanwhile, the Rice Farmers Association urged Nigeria to leverage this opportunity and export the commodity to other West African nations.