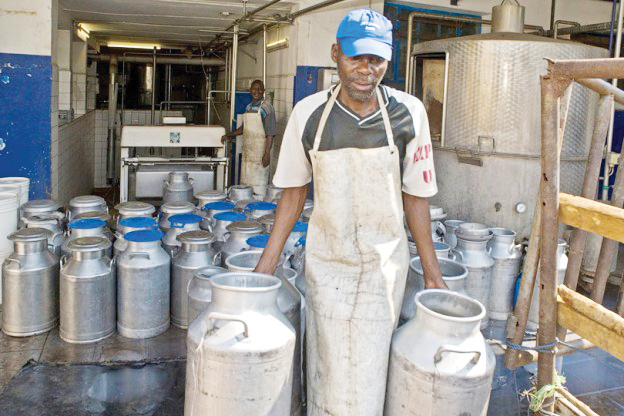 The Dairy Association of Zambia (DAZ) has revealed that over 545 million liters (about 550 million liters) of locally produced milk is wasted annually due to lack of a ready market and development of a refrigeration facilities network.

The Association has further called on the ministries of Livestock & Agriculture to put in place import quotas or find ways to effectively regulate the issuance of import permits for milk concentrates so that local Diary farmers market is developed.

Association Executive Manager Jeremiah Kasalo said most of the dairy milk produced locally is being traded informally as it does not reach the formal trading channels such as Zambeef’s Zam-milk, Lactalis’ Parmalat and Trade Kings Diary Gold among others.

It is this equipment in the form of chillers, which are inadequate in the country, and especially milk producing and collection centers.

However, when a market analysis is done, what is shocking is that the top processors have opted to import milk concentrates at the expense of developing an extensive local milk collection dealer network in Zambia.

As a result, some processors are re-constituting milk which is being sold in place of locally produced fresh milk.

Kasalo said government allowed re-constituted milk in the country in order to fill the gap and meet the demand for processed milk.

He said an exercise duty of K1.50 per litre was introduced last year and whatever milk powder is imported in bulk for further processing is charged 15% import duty which is an increase from the 5% that was being charged in the past, and this is to help make investments into collection and processing of locally produced milk competitive.

There is need of an additional 200 milk collection centers that each would need to have a storage capacity of 2500 litres per day to be able to mop up the milk which is locally available.

He also said the association has continued to work with the privately owned milk processing companies to encourage them to establish milk collection centers and has continued to lobby government to continue regulating the issuance of import permits.

He said the association has also continued to lobby government to introduce export tax or duty on maize bran so that the bran can be as cheap as possible in the country thereby making the cost of production lower and encourage a lot of people to not only go into dairy but also fattening of beef cattle.

Kasalo noted that there are three major grades of milk marketed in the country namely grade A,B and C and most of the milk traded in the country is grade A and B and the grades are based on bacteria load in the milk.

He said grade A is any milk which has 0-50,000 Colony Forming Unit (CFU) which is the amount of bacteria in the milk allowable by health standards. He added that grade B has the amount of bacteria between 51,000-100,000 and C has bacteria between 101,000 – 200,000 and anything beyond 200,000 is not allowed by law to be sold or processed into products to sell to the public unless for one’s own home consumption.

Kasalo said mastitis, a disease that affects the udder of a cow which in turn makes the milk go sour also contributes to the wastage of milk as well as load-shedding or the disruption in the supply of electricity that affected milk storage under refrigeration.

DAZ has also expressed concern that the practice of marketing re-constituted milk as fresh milk is killing the local diary industry which relies on selling its produce as fresh milk.