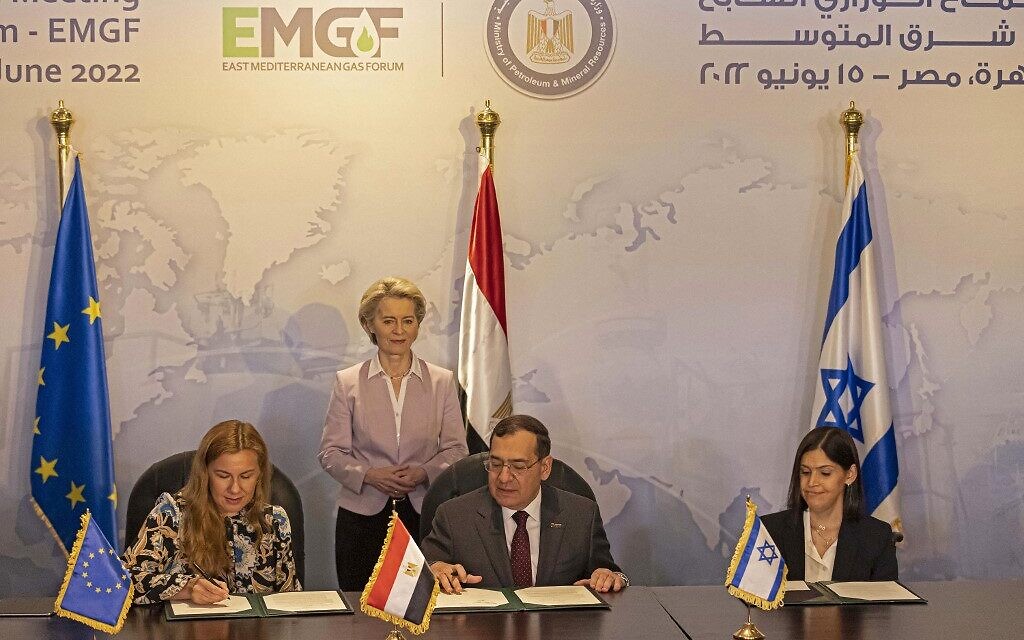 CAIRO/JERUSALEM, Israel and Egypt will aim to boost natural gas exports to Europe under a memorandum of understanding (MoU) signed  as the continent looks to replace Russian energy imports.

The framework deal signed with the European Union (EU) will be the first to allow “significant” exports of Israeli gas to Europe, Israel’s energy ministry said.

Under the agreement, the EU will encourage European companies to participate in Israeli and Egyptian exploration tenders, the ministry said.

Some Israeli gas is already sent by pipeline to liquefaction plants on Egypt’s Mediterranean coast, from where it is re-exported as liquefied natural gas (LNG).

Officials say they expect shipments of LNG from Egypt to Europe to increase under the agreement, though they have said it would likely take a couple of years before the exports can be significantly expanded.

Egypt is also a gas producer, but its exports have been limited by rising domestic demand.

“Today Egypt and Israel make a commitment to share our natural gas with Europe and to help with the energy crisis,” Israeli Energy Minister Karine Elharrar said after the signing of the MoU in Cairo.

Egypt exported 8.9 billion cubic metres (bcm) of LNG last year and 4.7 bcm in the first five months of 2022, according to Refinitiv Eikon data, though the majority goes to Asia.

Israel is on track in the next few years to double gas output to about 40 bcm a year as it expands projects and brings new fields online, industry officials say.

The EU imported 155 bcm of gas from Russia last year, accounting for about 40% of the bloc’s overall consumption.

The agreement signed on Wednesday recognises that natural gas will have a central role in the EU’s energy market until 2030.

Following that, the use of natural gas is expected to decline in line with its commitment becoming a zero-emission economy by 2050.

The deal was signed as Egypt hosted the East Mediterranean Gas Forum, a grouping established in 2020 that aims to boost gas trade between regional states including Israel, Greece, Cyprus and Jordan, and during a visit to Cairo by European Commission President Ursula von der Leyen.

“This is a big step forward in the energy supply to Europe,” von der Leyen said after meeting Egyptian President Abdel Fattah al-Sisi, adding that the EU wanted to work with Egypt long-term to expand renewable energy supplies.

Part of that is an ambitious partnership for hydrogen production, expected to be launched when Egypt hosts the COP27 climate conference in November, she said.

“I see it as a first step leading to a Mediterranean-wide agreement because I see that the energy supplies were mostly traditionally in the northern part, now are shifting towards the global south and east,” von der Leyen said.

Egypt recently signed a flurry of preliminary agreements for green hydrogen and ammonia projects on its Red Sea coast.