The pharmaceuticals market in Africa is expected to reach a business opportunity of $45 billion in 2020, propelled by a convergence of changing economic profiles, rapid urbanization, increased healthcare spending and investment, and increasing incidence of chronic lifestyle diseases. The value of Africa’s pharmaceutical industry jumped to $20.8 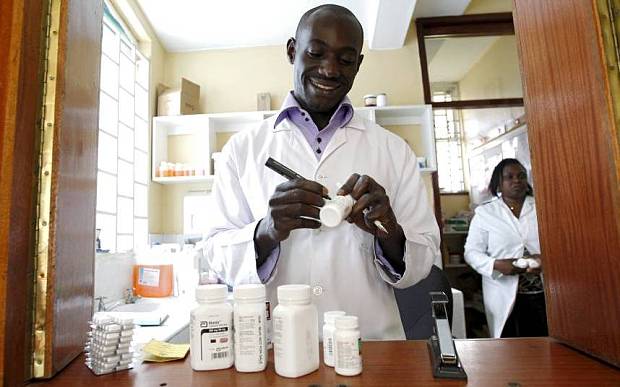 billion in 2013 from just $4.7 billion a decade earlier. That growth is continuing at a rapid pace and it is predicted that the market will be worth $40 billion to $65 billion by 2020. That’s good news for multinationals and pharmaceutical companies seeking new sources of growth as developed markets stagnate. It’s also good news for patients, who have gained access to medicines previously unavailable on the continent.

The tropical climate of Africa makes the continent the largest reservoir of infectious diseases, particularly malaria, tuberculosis (TB), and acquired immune deficiency syndrome (AIDS), besides frequent outbreaks of polio, meningitis, cholera, pandemic influenza, yellow fever, measles, hepatitis, and tetanus. With the increasing adoption of Western lifestyle in Africa, there has been a paradigm shift in the burden of illness towards non-communicable diseases (NCDs), driving the demand for chronic prescription drugs. While continuing to suffer from infectious and parasitic illness, lifestyle diseases such as cardiovascular diseases, diabetes, and cancer will witness high growth rates throughout the forecast period. The World Health Organisation predicts that the proportional contribution of NCDs to the healthcare burden in Africa will rise by 21% through 2030.

What’s Driving Growth Of The Pharmaceutical Industry In Africa?

Africa’s pharmaceutical markets are growing in every sector. Between 2013 and 2020, prescription drugs are forecast to grow at a compound annual growth rate of 6 percent, generics at 9 percent, over-the-counter medicines at 6 percent, and medical devices at 11 percent. Three factors are driving this growth:

• Rapid Urbanization. Africa’s population is undergoing a massive shift. By 2025, two-fifths of economic growth will come from 30 cities of two million people or more; 22 of these cities will have GDP in excess of $20 billion. Cities enjoy better logistics infrastructures and healthcare capabilities, and urban households have more purchasing power and are quicker to adopt modern medicines. 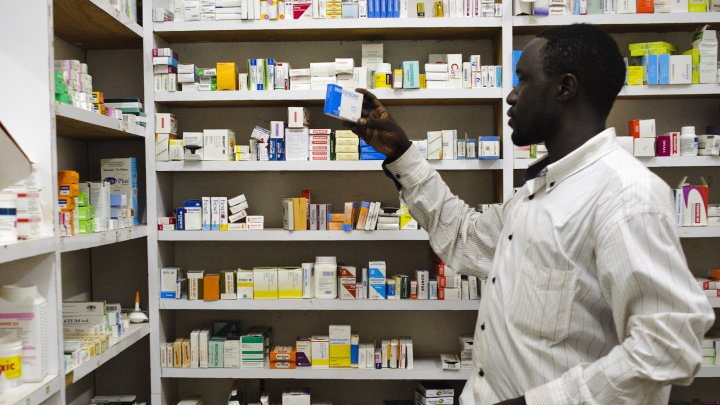 • Healthcare Infrastructure. Between 2005 and 2012, Africa added 70,000 new hospital beds, 16,000 doctors, and 60,000 nurses. Healthcare provision is becoming more efficient through initiatives such as Mozambique’s switch to specialist nurse anesthetists and South Africa’s use of nurses to initiate antiviral drug therapy.

• Africa’s Changing Business Environment. To create a more supportive environment for business, governments have introduced price controls and import restrictions to encourage domestic drug manufacture; required country-specific labeling to reduce counterfeiting and parallel imports; and tightened laws on import, wholesale, and retail margins. In the pharma industry, meanwhile, pharmacy chains are consolidating, horizontal and vertical integration is on the rise, and manufacturing is expanding. A flurry of mergers and acquisitions, joint ventures, strategic alliances, partnerships, and private-equity deals are further extending Africa’s markets.

The Growing Market For Pharmaceutical In Africa

Africa is in a transition phase, on its way to achieving adherence to global standards, such as the WHO pre-qualification for manufacturing. Local production is regarded as a key strategy for sustained access to quality-assured medicines for the long term. The regulatory environment for manufacturing in regions such as East Africa seems to grow rapidly, owing to regional harmonization.

Healthcare coverage is expected to expand to a greater proportion of the population through National Health Insurance (NHI) initiatives, as well as through memberships with private health insurance providers, particularly among the emerging middle class.

South Africa remains as the best established region for pharmaceutical manufacturing in sub-Saharan Africa. However, the local manufacturing markets in East and West Africa are relatively well developed and positioned to grow. A bulk of Africa-based pharmaceutical companies that are developing medicines have simple formulations and mixtures, which are easy to do. Technology transfer is paramount to developing the manufacturing sector in Africa, particularly as the disease burden is changing. There is a paradigm shift coming from the lower end to the higher end of adoption of complex formulations, in line with treatment guidelines, especially in HIV and AIDS and NCDs.

In a world of slowing and stagnating markets, Africa represents perhaps the last geographic frontier where genuinely high growth is still achievable. Early movers can take these four steps to pursue competitive advantage:

Africa is not one unified market, but 54 distinct ones, with wide gaps between countries in terms of their market size, growth trajectory, macroeconomic landscape, legal structure, and political complexities. Over the past decade, ten countries have delivered more than two-thirds of Africa’s GDP and cumulative growth.1 However, much of the opportunity lies not at country level, but in cities. In fact, our analysis shows that 37 percent of African consumers are concentrated in 30 cities, which will have more consuming households than Australia and the Netherlands combined by 2025.

In many African countries, generic drugs are gaining market share at the expense of over-the-counter and branded products. In South Africa, Egypt, Algeria, Morocco, Nigeria, and Kenya, generics grew at an average CAGR of 22.3 percent between 2004 and 2011, considerably faster than the 13.4 percent for pharmaceuticals as a whole. This trend looks set to continue. Between 2010 and 2014, generics’ share of the market grew from 22 to 25 percent in Algeria, for instance, and from 23 to 28 percent in Morocco. 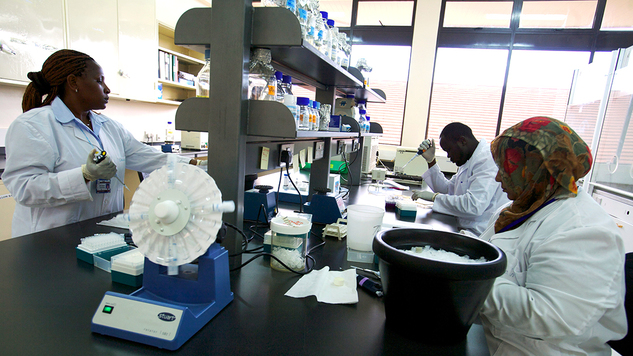 Several factors are responsible for this shift. First, physicians and pharmacists are getting used to prescribing generic drugs. Second, as national insurance programs expand and more people gain access to health care, demand for generics will rise at the expense of costlier branded drugs. Third, many governments are showing strong support for generics. For instance, South Africa requires pharmacists to inform private patients about generic alternatives when they purchase prescription drugs; Nigeria has a similar law; and Morocco aims to increase generics sales to 70 percent of publicly funded pharmaceuticals

How To Penetrate The African Market

Real talent is key and requires investment in big, effective local marketing and sales teams. That means hiring more pharmacy representatives, building teams’ technical skills, and selecting and developing strong local managers to lead them. Sales teams also should be set up in a flexible way that enables them to be responsive to the needs of local markets.

Partnerships with governments are equally important, whether they involve working with medical opinion leaders to guide research priorities and secure funding, or collaborating with health ministries and nongovernmental organizations to provide public-awareness campaigns, health screening, treatment, equipment, and training for hospitals and clinics. Johnson & Johnson, for example, has partnered with the South African government to introduce an education program for maternal, newborn, and child health that operates via mobile-phone messaging.

In parts of Africa, supply and distribution mechanisms still pose challenges: regulations are evolving, transport and logistics infrastructures are patchy, and lead times can be long. The ability to innovate the distribution channel and set up effective operations against this challenging backdrop is critical to capturing growth opportunities. Helpful strategies include locating fixed assets in countries with well-established political and business structures, outsourcing supply chains to third-party operators, and partnering with local logistics providers to identify efficient transport routes. In the key area of customs and border control, companies should work with the most reliable agents to minimize shipping delays, use only bonded distribution centers, and ensure all customs paperwork is airtight.

In a world of slowing and stagnating markets, Africa represents the last geographic frontier where high growth is still achievable. As ever, the key to success lies in understanding individual markets in granular detail. Early movers with the right approach should be able to capture competitive advantage. Africa will continue to grow for the foreseeable future. Now is the time for drug companies to decide whether they want to be part of that growth and, more important, play an active role in improving public health.

Often in the past, those on the continent who require medication have not been able to afford it because it is too expensive, while distribution networks have been limited because suppliers know that the market for selling their products at a commercial rate is limited. Yet the economics of pharmaceutical production are changing.

For many years, pharmaceutical companies sought to maintain fairly high prices for their products wherever they were sold, but that system has been greatly eroded for key drug classes, including for the anti-retrovirals used to treat people living with HIV-Aids.

Manufacturing costs, including the price of the raw materials, often comprise a very small proportion of the total cost of medicines, with the lion’s share often absorbed by research and development (R&D). As a result, identical copies of many pharmaceuticals, known as generics, can be produced at very low cost.

Indian firms in particular have been able to fill this niche, as Delhi greatly reduced patent protection in 1970, allowing Indian firms to reverse-engineer many medicines.

Global pharmaceutical companies have repeatedly challenged this process through legal action but the generic manufacturers have won a number of high-profile victories, including on the supply of drugs to Africa that combat many of the continent’s biggest killers, including HIV-Aids, and the same process is likely to occur with the distribution of anti-retrovirals.

Africa Business Pages has compiled a special directory that lists importers of pharmaceutical products. The Africa Pharmaceutical Directory is updated every six months and is available for download here.