A class action lawsuit has been filed against the mining company Anglo American over its alleged failure to prevent widespread toxic lead pollution in the Zambian town of Kabwe. The town hosted one of the world’s biggest lead mines for many decades and scientists have reported “alarming” levels of lead in people’s blood.

“The public environmental health disaster left behind by Anglo means there are more than 100,000 children and women of childbearing age in Kabwe who are likely to have suffered lead poisoning as a result of pollution caused by Anglo,” according to the filed legal documents.

The lawyers argue that Anglo American’s South African subsidiary is liable as it was responsible for the mine from 1925 to 1974 and that this was when the majority of the pollution was caused. Anglo had “a duty of care to protect existing and future generations of residents of Kabwe”, according to the legal documents. 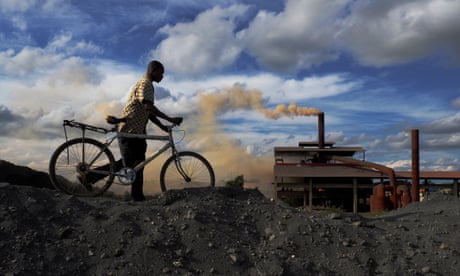 The world’s most toxic town: the terrible legacy of Zambia’s lead mines

Lead has long been known to be highly poisonous and there is “no level of lead exposure that is known to be without harmful effects”, according to the World Health Organization. A scientific study of 1,190 people in Kabwe published in 2019 called exposure levels there “alarming”. It concluded: “This is the first study that has revealed the true extent of lead exposure in the whole Kabwe town, which poses a serious public hazard and should be given urgent attention.”

“Childhood lead poisoning has devastating effects on neurological development and causes overt clinical signs including convulsions and coma,” said the scientists. They found average blood lead levels were above that classed as high by US authorities in all but one of 13 districts in the town. In the most affected district, the average level was nine times above the US threshold.

The lead pollution is in the soil and dust that children play in, and two-year olds had the highest blood levels. Some young children had levels more than 20 times higher than the US threshold, which can cause severe brain damage or death according to the WHO.

The case is being brought by 13 representative plaintiffs. Some are children with very high blood lead levels and others are women, as lead pollution poses great risks to foetuses during pregnancy.

The class action alleges that Anglo America is liable for substantial emissions of lead into the local environment due to deficiencies in the operation of the mine and for failing to ensure the clean-up of contaminated land. The mine was transferred to a Zambian state-owned company in 1974 and closed in 1994.

Anglo American’s human rights policy states: “Where we have caused or contributed to adverse human rights impacts we will contribute to their remediation as appropriate.”

Richard Meeran, at Leigh Day, a UK-based legal firm acting for the plaintiffs, said operating a large mine close to communities was a clear risk: “Unfortunately, it appears that Anglo failed to ensure that sufficient measures were in place.”

Zanele Mbuyisa, at law firm Mbuyisa Moleele in Johannesburg, which is also acting for the plaintiffs, said a 1970s study showed high blood lead levels: “The very same lead poisoning that was happening at that time is continuing happening now.”

Another scientific study, published in 2018, found that Kabwe Town “belongs to the most contaminated districts in Africa” and that “the development of a program of health care … is of utmost importance”. The legal action is seeking the provision of a screening program, treatment, a clean-up of the pollution and compensation for those poisoned.

“[Anglo American] need to do something about it because they have destroyed our bodies and the lives of our children, as well as their brains,” said the parent of one of the anonymous child plaintiffs, in a video recorded by the law firms.

The law firms have filed expert evidence from clinical toxicologists and mining and environmental specialists. The case is being funded by Augusta Ventures, the UK’s largest litigation fund.

“Anglo American reports that a case has been filed in South Africa in relation to alleged lead poisoning in Zambia,” said a company spokesperson. “No such claim has yet been served on Anglo American. Once the claim is received, the company will review the claims made by the firm and will take all necessary steps to vigorously defend its position.” Leigh Day said the company had been served.

“By way of context, Anglo American was one of a number of investors in the company that owned the Kabwe mine until the early 1970s,” the spokesperson said. “Anglo American was, however, at all times, far from being a majority owner.”

A reporter in kabwe found people collecting scrap lead in the giant waste heaps, where lead levels in the soil are extremely high. One young woman, Debola Kunda, was being helped by her four-year-old son. She was concerned about the health of her children, but said: “How will we eat if we stay at home?”