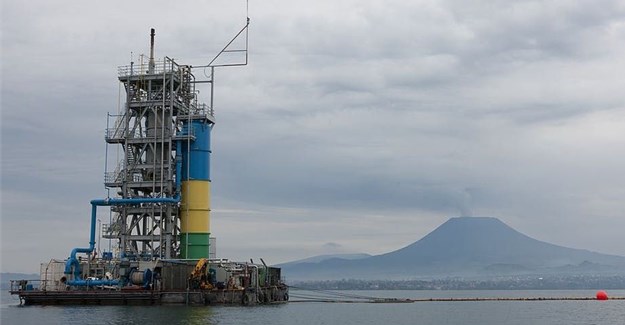 Lake Kivu lies on the border between the Democratic Republic of the Congo and Rwanda. It’s almost the size of Mauritius and has a maximum depth of 480 metres. Lake Kivu also stores huge amounts of methane gas which Rwanda is extracting to produce electricity. Natacha Tofield Pasche explains how this process works.

How did methane develop in Lake Kivu and why does it have so much?

Lake Kivu contains exceptionally large amounts of dissolved carbon dioxide and methane in its deep waters. These gases have accumulated over 800 to 1,000 years.

The carbon dioxide originates from two active volcanoes at the lake’s northern side: the Nyiragongo and the Nyamuragira. These 20,000 year-old volcanoes are among the most active in the world. The methane comes from the degradation of organic matter produced at the lake’s surface (representing one third of the methane produced in Lake Kivu) and the second process – which produces most of the methane in the lake – is the conversion of carbon dioxide into methane. The concentrations of carbon dioxide are five times higher than the concentrations of methane.

Such a large accumulation of methane in a lake is unique, and has never been reached in any other lakes.

Simply put, this particularity is caused because the gases are being trapped in the deep waters by an inflow of deep sub-aquatic spring containing warm, salty and carbon-dioxide rich water. This effectively creates a seal.

Currently, 45km3 of methane are economically viable for extraction, which could generate as much as 500MW of electricity over 50 years. But the electricity produced is highly dependent on the technology and the achieved efficiency.

What are the benefits of using methane from Lake Kivu for electricity?

First, the dissolved gases pose a risk to the local population, as they could potentially erupt from the lake. Explained very simply, a large disruption – such as a landslide – could trigger gas bubbles to rise to the surface and erupt without warning signs. Gas bursts, such as this, took place twice in Cameroon. Lake Monoun’s gas burst in 1984 killed 37 people, and a gas burst at Lake Nyos in 1986 caused the death of 1,700 people.

By removing methane, the chances of a gas eruption are strongly reduced because there’s less pressure.

Secondly, extracting methane will produce electricity, which is crucial for Rwanda’s development. Currently only about 30% of Rwandans have access to electricity through the national grid. The installed capacity is 218MW.

Methane extraction could significantly contribute to Rwanda’s electrification and there are several projects underway to extract the gas.

The Rwandan government plans to reach an electrification rate of 100% by 2024. KivuWatt power plant – run by Contour Global – already extracts methane to generate electricity. The first phase already generates 26MW of electricity. It will reach 100MW in the second phase.

A public-private partnership – between Shema Power Lake Kivu Limited, formerly Symbion Energy, and the Rwandan Government – has a project to build a plant to provide 56MW and to upgrade a pilot plant from the current 3.6MW to 25MW.

Another locally registered company, Gasmeth will start the construction of a gas extraction facility in 2020. The goal is to generate and sell compressed natural gas in bottles.

How does the extraction process work?

Methane extraction occurs in an area called the “resource zone”, at a depth between 260 and 480 metres, where most of the methane is concentrated.

Using a long pipe, deep water is pumped onto a floating platform. As the deep water moves to the surface in the pipe and the water pressure reduces, the gases separate from the water. The mixture of gas and water arrives in a separator, where the gas is further extracted.

At this stage, the gas contains a high concentration of carbon dioxide and so it goes through a purification process to enrich it in methane. This is then moved through a pipeline to the generators.

Given the uniqueness of Kivu methane deposit, there are no other lakes in the world where methane is extracted in this manner.

What negative impacts could this have on the lake and how can they be avoided?

First, the extraction process could disturb the lake’s layers and may increase the risk of gas eruption. To avoid this risk, models are used to predict the acceptable depths to extract and release the deep water.

The second impact could be a modification of the lake ecosystem, from algae to fish. Deep water contains much more nutrients than the surface water and releasing it into the surface could have catastrophic consequences for the biodiversity. Indeed, nutrients could generate a high production of algae that deteriorate the water quality and the food chain. This is exactly what happens in Europe, before waste water treatment plants. However, strict rules for the extraction must be in place to prevent any nutrients from being released into the surface water.

The third impact could be a waste of the gas resource, if the methane operator is not extracting it in an efficient way.

In any case, these impacts are assessed by international experts and adhere to management prescriptions, prepared by the Expert Working Group on Lake Kivu Gas Extraction, that regulate methane extraction.

These prescriptions were recently revised, and jointly signed by Rwanda and the Democratic Republic of Congo. This is an important step, as both governments will implement the safety rules throughout Lake Kivu.